October 19, 2018 - Ryder is pictured below with two of his get, littermates Tusk and Sizzle, as they won third place in the Stud Dog class at the SHCA National Specialty! We are so proud of Ryder, both as a show dog and a producer - every litter he has sired for us has been of consistent quality, with multiple show-worthy pups for us to choose from, and he does the same no matter who he is paired with.

Thank you to judge Chris Curtis, and to Julie Lamonska for taking Sizzle into the ring for us! 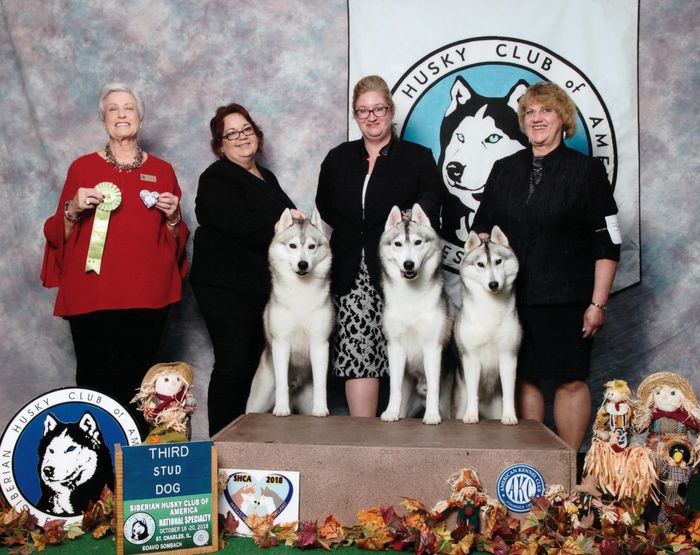 Ryder is pictured here winning a big 4 point major (one dog shy of a 5 point major) toward his Grand Championship! He also won Owner Handled Best of Breed!  Thank you to breeder-judge Mr. Vincent Chianese. Always owner/breeder handled by Charity Reger! So proud of this team! The entry was big and they were against lovely competitive dogs, some that are in the top 5 in the nation! Sadly, we had a prior appointment that day and could not stay for Working & Owner-Handled groups. Either way it was one heck of a GREAT DAY! 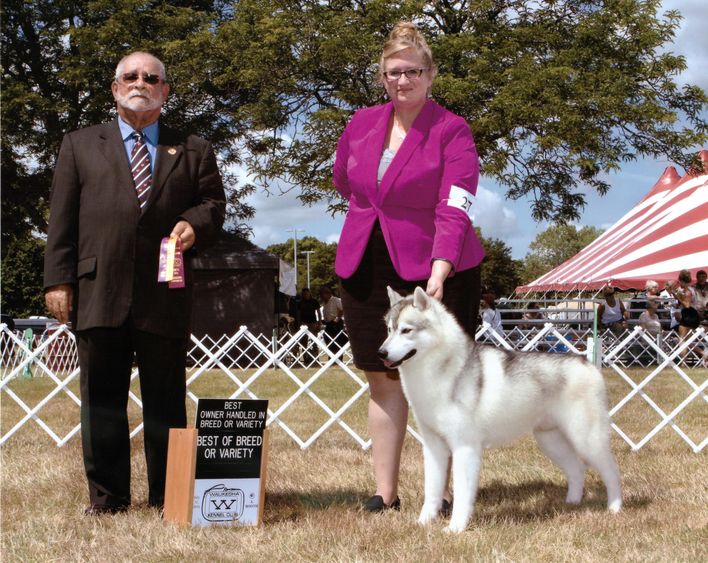 Ryder started the day winning Best in Puppy Sweepstakes and ended the day with Winners Dog from the Bred By Exhibitor class for a 5 point major and then Best of Winners at the 2016 Siberian Husky Club of the Twin Cities! This finished his championship! Thank you Breeder Judge Janis Church Stadler! What a day! We are so incredibly proud of this boy! 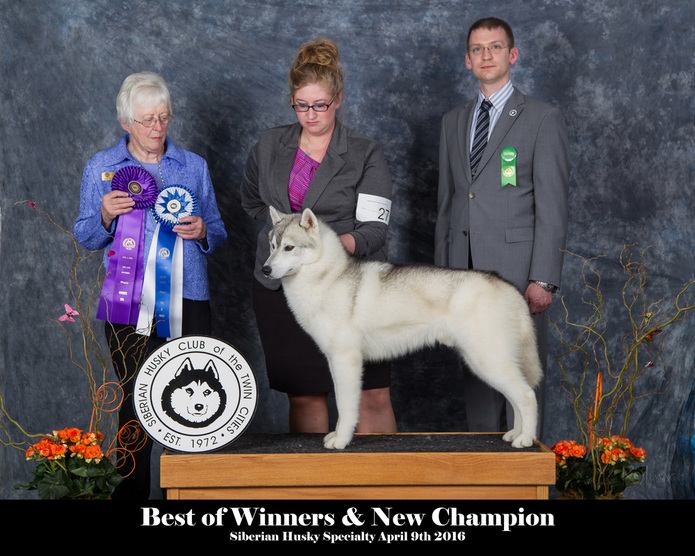 This was such a fun win for us! Ryder only needed a 3 point major to finish his championship, but we could not enter him in Sweepstakes at the Siberian Husky Specialty in April 2016 if he was a champion. So we held him out of competition for a couple of months so he could compete. Not only did he compete and win his class... he won BEST PUPPY IN SWEEPSTAKES! He was 15 months old and competing in the 12-18 month class. Thank you Judge Ms. Amy Ross for this wonderful and delightful win! 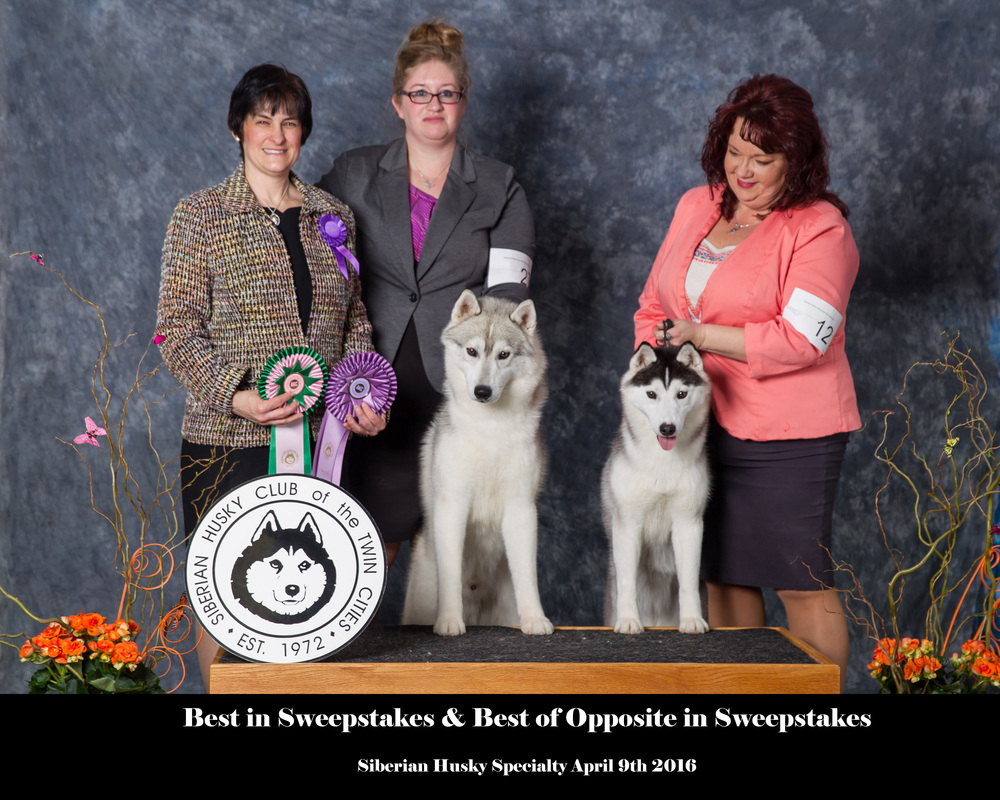 This photo is of Ryder winning second place in the 9-12 class at The Siberian Husky Club of America National Specialty. It was a large competitive class and only his second time being shown in an AKC venue. No words can describe how we felt having one of our "bred by" boys being honored with a placement among the best of the best. Thank you Judge Mr. Danny Brand for this honor. 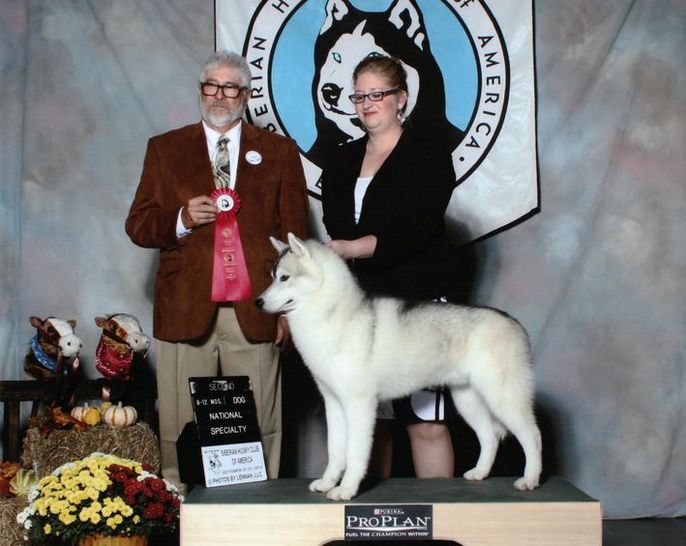 This photo is from the same show as below. Ryder's cousin Kruiz was also entered and won his class and took Reserve Winners Dog to Ryder!  Judge Mackia could not say enough wonderful things about these cousins! He was delighted to know they were related and went on to say he loved both of their foot placements, movement and that they were both gorgeous examples of the breed. THANK YOU JUDGE! Talk about consistency! 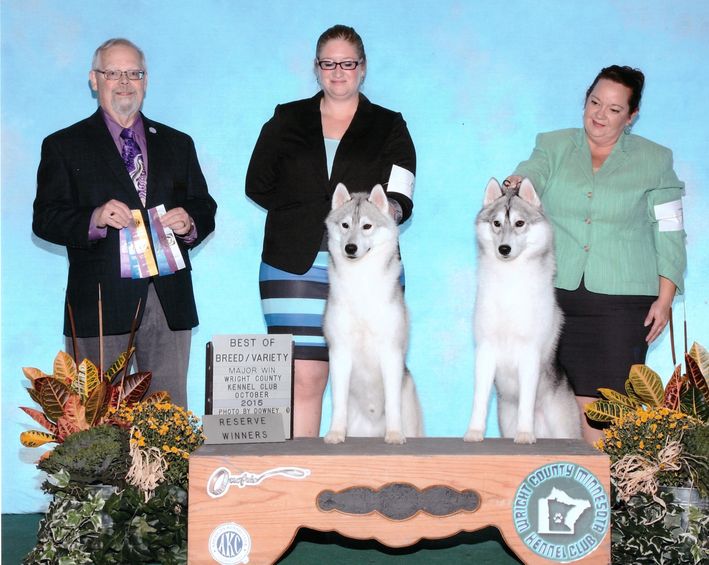 This is Ryder's FIRST official AKC weekend. Ryder is 9 months old in this picture. He was entered in Bred By Exhibitor against dogs who were almost 5 years old. Not only did he win his class, he won Winners Dog for a major and then went in against three AKC Champions and won BEST OF BREED! We were just over the moon & the judge could not say enough wonderful things about him! Again, Ryder is such a lover, a sweetie and stayed humble as if to say "What is the big deal?" 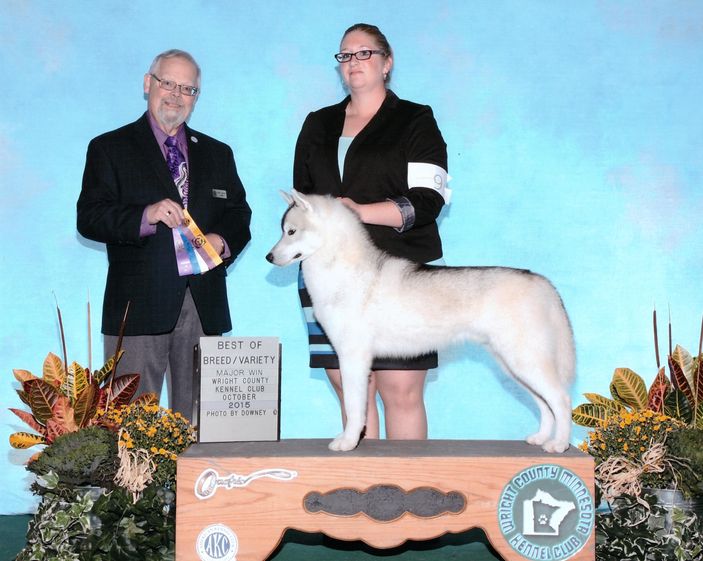 This photo shows Ryder's first official weekend of being old enough to compete for his championship. Ryder not only completed his UKC Championship but he did it with style, winning Best of Breed over THREE Champions! Ryder went on to win a Northern Group 1st and he competed in Best in Show that day! We are so very proud of this humble but gorgeous boy! 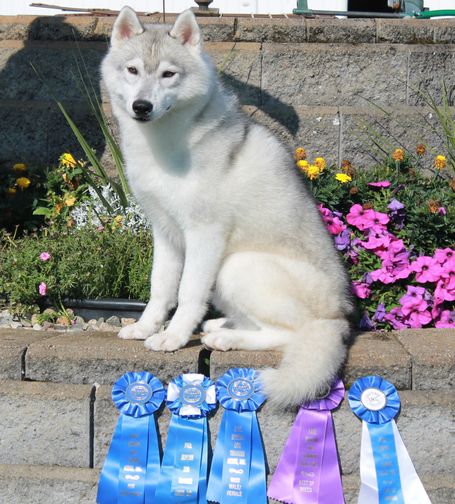 Ryder is pictured here at 3 months old at his first weekend of showing. Ryder won 2 Novice Puppy Best of Breed awards, a Best Puppy in Show, and a Reserve Best Puppy in Show!  A couple weeks later he was shown again and he won two more Best Puppy in Show awards! That is when we realized just how darn special Ryder was. We loved his personality and funny antics but the judges kept telling us how outstanding he was and his show record as a baby proved to be the predictor of his future! 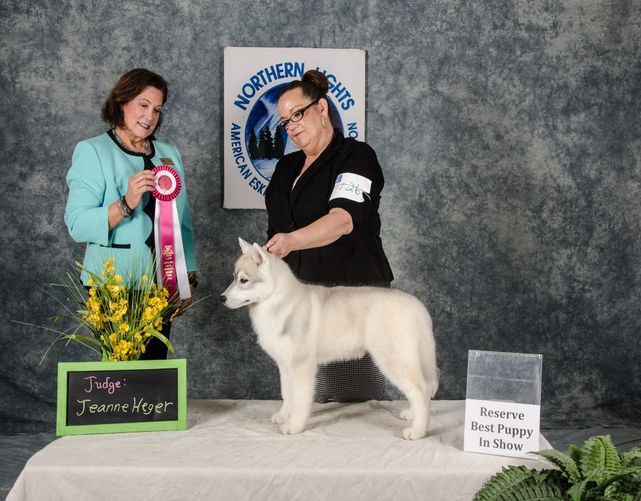